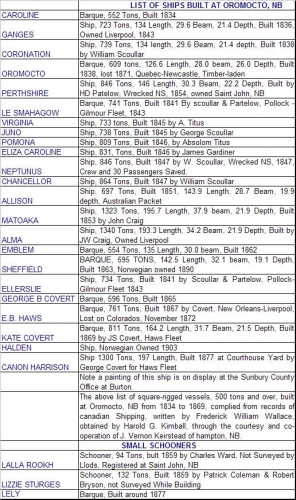 From the days of wooden ships...

Oromocto has a history as ancient as wandering Indian tribes of thousands of years ago and as modern as tomorrow. Oromocto boasts one of the first land sales in the Maritime Provinces. Mathieu d'Amours' deed was dated March 16, 1693, and his grant and subsequent homestead was on the St. John River opposite the mouth of the Oromocto River.

During the American Revolution, it was believed that the Americans would invade parts of New Brunswick - Maugerville/Sheffield being thriving English communities. A blockhouse was constructed on the Oromocto side of the river in 1777. The invasion never took place and the blockhouse was eventually razed. It was rebuilt during the war of 1812.

Hazen, White and Simons had by this time established a thriving trading post at the mouth of the river, which supplied not only Sunbury County, but also most points north. Oromocto born Sir Douglas Hazen, descendant of the original Hazen, was Premier of New Brunswick from 1908 to 1911.

In 1783 the United Empire Loyalists arrived. The community prospered and as the old Loyalists moved, or died, new blood came into the area. From Oromocto, these early settlers moved and founded the communities of Geary, Lincoln, Rusagonis and several others.

By 1833 shipbuilding had been established in Oromocto and Burton. Within a very short time many of the largest ships afloat were launched from local yards. During the years of sail, the local yards turned out at least twenty-two 500 ton ships. Masting operations had been carried on at Oromocto since as early as 1700.

By 1877 the age of sail had seen its day. Oromocto had all but died. A population of hundreds dropped to a population of dozens. Many left the area, and the few who remained went to work in the local mills. Slowly the town started rebuilding but come September of 1919, Oromocto received its biggest blow yet. A spark flew from the River Valley Lumber Company and started a fire. Before it was over, more than thirty homes, three stores, several barns and outbuildings, as well as several churches were destroyed; it was the town's second major fire in one year. 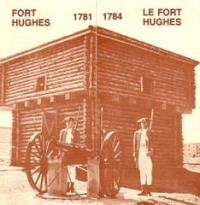 The area has long been a “brain centre,” giving birth and/or lodging to some of the great men of New Brunswick and Canadian history. Theodore Estabrooks, founder of the Red Rose Tea Company lived for several years in the area. A member of the famous Wilmot family of Lincoln became a Father of Confederation and is buried at Oromocto. Others were the Hazens, Hollys, Tapleys, and Harrisons. Bliss Carman's family had its beginnings in Maugerville, as did Canada's first novelist Julia Beckwith Hart. Harry Ormond, twice decorated by Lord Nelson, and Alonzo Putnam Connolly, Civil War hero, were also from the area. Benedict Arnold had dealings with the area when he commissioned the Sheffield Shipyards to build a ship, and he formed a partnership with Maugerville's Nehemiah Beckwith.

Colourful men have represented the area in both federal and provincial Houses over the years, among them, S.D.L. Street, fighter of duels; colourful and fiery Hugh Havelock McLean; James Glennie and Victoria Cross winner, Milton F. Gregg.

In 1952, it was announced that a military base would be established in the area. Almost immediately expropriation started and by 1955 a population of dozens grew to one of thousands. Oromocto is the site of C.F.B. Gagetown and the Combat Training Centre, the largest military establishment in the British Commonwealth.

Today, the town boasts just about the cleanest streets anywhere, and the air and water are pollution free. Active and enthusiastic community members have made Oromocto “Canada's Model Town”!