Each dog owner in the Town of Oromocto must register their dog(s) on or before the 31st of January each year. Every person who, after the second day of January in any year, becomes the owner of a dog, or who, owning a dog, takes up residency in Oromocto, shall register the same within fourteen (14) days after becoming such owner or taking up residency and shall pay the license fee as prescribed above. 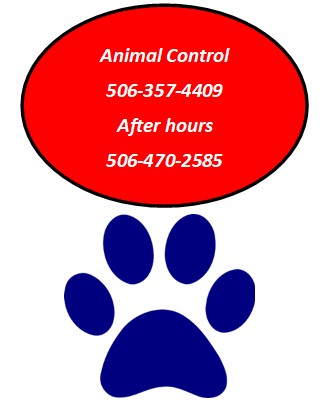 You may register in person at any of the following locations:

Proof of Rabies vaccination must be provided before a dog license can be issued.

The Town's animal control enforcement is authorized as per the Town's By-Law 417,  A By-Law Establishing Control of Animals in the Town of Oromocto.

If an animal defecates on any public or private property other than the property of its owner, the owner shall remove such feces immediatly. This shall not apply to persons using seeing-eye dogs.
Please keep our community clean and healthy, carry a plastic bas so that you may pick up after your pet.

Any animal found running at large in the Town, except on the premises of the owner, and not held on leash by a person accompanying it, may be seized and impounded by the Animal Control Officer or a Police Officer for safe keeping until released or otherwise disposed of.

Every Owner of a dog who:

A judge of the Provincial Court on a complaint being made to him that an animal has bitten or attempted to bite any person, and upon being satisfied that the complaint is warranted, may make an order:

Until such time as the Court makes an order, an animal that has bitten or attempted to bite a person, may be seized and impounded by the Animal Control officer, in the interest of public safety. The animal will then be disposed of in accordance with the order of the Court and the owner or keeper will be responsible for the payment of accumulated fines and pound fees, should the Court so direct.

Any person who fails to comply with any provisions of the Animal Control By-law is guilty of an offence and is voluntarily liable to fines up to a maximum of $75.00. If voluntary payments have not been received on or before the Provincial Court hearing, the person charged with the offence is liable on summary conviction to a fine of not less than $100.00 and not more than $500.00, plus license and pound fees, if applicable.

The Oromocto SPCA operates the Animal Shelter at 111 D’Amours Street. The Shelter provides a temporary home for homeless and abandoned animals in Oromocto. The SPCA enforces the New Brunswick Provincial SPCA Act by investigating abuse or neglect of animals.  The Oromocto and Area SPCA conducts on-going educational programs in the Oromocto and Area Schools that promote the humane care of animals, teaches children how not to get bitten by a dog by showing them how to safely approach a dog they don’t know or what to do if a dog shows itself to be unfriendly.

SPCA HOURS OF OPERATION
Monday to Sunday: 11:00am until 5:00pm (everyday)
Holidays: Closed